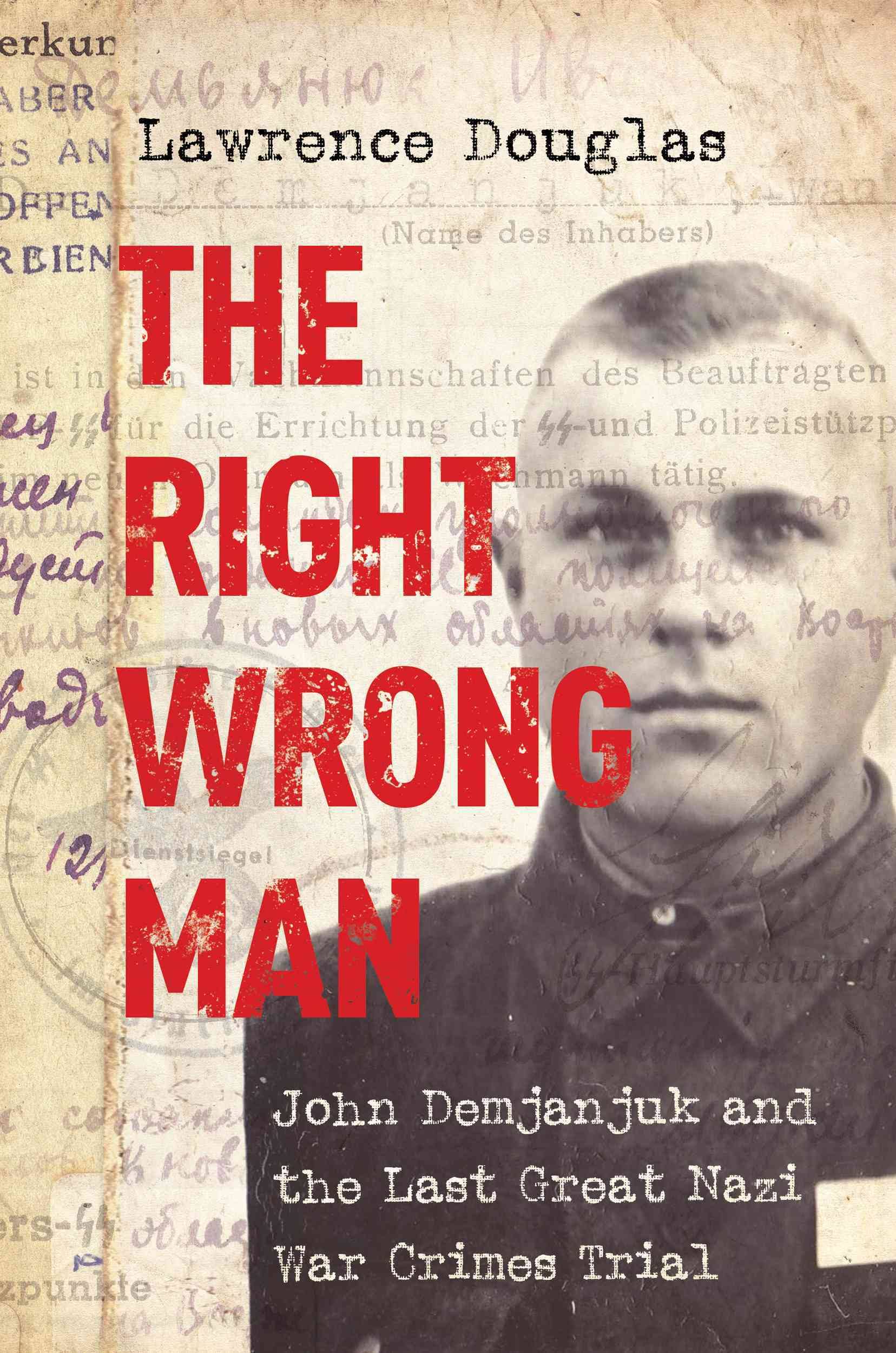 “[A] masterful account of Demjanuk’s long, very strange case….deftly delivers disquisitions on nuanced legal questions as if they were plot points in a thriller...” Wall Street Journal

“’The Right Wrong Man,’ from its summary title to its thoughtful postscript, is an impressive work, as well as a timely one in its demonstration of the power of legal systems to learn from past missteps.” Anthony Julius, New York Times Book Review

“Sophisticated and suspenseful, the book provides a trenchant analysis of the legal and moral dilemmas surrounding trials for genocidal crimes against humanity.”  Jerusalem Post

“[Douglas] deftly weaves the ongoing battle of Demjanjuk’s with the evidentiary trail being followed by the sleuths in the US Justice Department and elsewhere….The Right Wrong Man is an important read about the accountability those who do wrong ultimately face.” San Francisco Book Review

“…Lawrence Douglas’s immensely readable book absorbs the reader in the twists and turns of the Demjanjuk saga, helping us understand both why justice required prosecuting Demjanjuk for his “egregious moral complicity,” and how the job got done.” Commonweal

“For Douglas, this last great Holocaust trial…enshrined a new form of memory, one which preserves the moral strength of survivors’ stories long after they are gone.” The New Republic

“…behind this story lies a fraught web of issues that Douglas untangles with exceptional skill…. a tour de force…” Foreign Affairs The Memory of Judgment: Making Law and History in the Trials of the Holocaust
(Yale University Press, New Haven, 2001)

His excellent book will be of great value to historians, legal scholars, and all those who want to understand the potential and limits of judging past and present crimes against humanity.”—Omer Bartov, American Historical Review

"… a brilliant study that should be required reading for anyone even remotely interested in the subject."—Jan Klabbers, European Journal of International Law

“In this superb book, Lawrence Douglas finds middle ground between critics who argue for a strictly legal approach to bringing the perpetrators to justice, and those that argue that legal forums and procedures mangle and distort a sophisticated understanding of such events. . ..”—Craig Pepin, H-Net Reviews

“An important, rigorous and insightful study of atrocity, memory, survivor testimony and their collectively fraught history of casting and judgment in legal process.”—Simone Gigliotti, International Affairs

“It is difficult to over-praise this book. Douglas combines rare gifts: he can tell a story marvelously well, and use it to furnish philosophical reflections of great insight and depth. His prose is beautifully flexible and precise, and he is virtuosic in his ability to tease out the multiple meanings of courtroom argument or testimony. . . . The Memory of Judgment deserves the widest possible readership.”— Jamie Mayerfield, Punishment and Society

“The Memory of Judgment is an impressively thoughtful work, important not merely for what it reveals about how the Shoah has been figured in post-war Western jurisprudence, but more generally, about the possibilities and limitations of a criminal trial as an instrument of historical understanding and commemorative pedagogy.”—Michael A. Bernstein, Times Literary Supplement “In its deft exploration of the way identity, especially Jewish identity, is constructed and performed, The Vices does justice to its elegant Nabokovian inspiration.”—Adam Kirsch, The New Republic and Tablet Magazine

“The second novel by Lawrence Douglas gave me delight on every page. I’m always careful about calling something Nabokovian, mostly because I’ll see that in a review and read the book in question and it’s fine but not as good as Nabokov, you know? But this one is Nabokovian—there is no other word.”—Ed Park, New York Magazine, Books of the Year, 2011

“sharp, stylish, suspenseful….an elegant parable about the allure of self-invention.”—New Statesman, Books of the Year, 2011

“As dazzlingly constructed as it is limpidly told, The Vices is a duplicitous delight…”—Bookforum The Catastrophist
(The Other Press, May 2006)

"…an American Lucky Jim: an acerbic comedy of manners with serious issues (responsibility and veracity in both marital and global relationships) at its solid core."— Kirkus Review, starred

"Daniel Wellington, the manic clueless narrator of Douglas’ highly amusing debut, is a case study in male neurosis…That we enjoy the company of this walking disaster is a tribute to Douglas’ witty prose."— Entertainment Weekly, THE MUST LIST

"…like John Updike and Richard Ford, with whose work this debut novel bears comparison, [Douglas] treats his readers to finely tuned prose well seasoned with humor, both subtle and slapstick."— Carolyn Maddux The Antioch Review

"Hilarious…[ The Catastrophist] masterfully merges micro and macro, the grimness and occasional glory of everyday life with history writ large."— The Village Voice

"Deploying wit and humor and an acute, darker insight, Lawrence Douglas leads us through Freudian fields with an anti-hero we can’t help but fall for immoderately."— Boston Globe

"Douglas is an American. But it's British names Iris Murdoch, Malcolm Bradbury, Michael Frayn that come to mind as fellow purveyors of his brand of brainy comedy."— Seattle Times "Sturgeon Tattoo is the kind of book Stieg Larsson might have dictated from beyond the grave to Mel Brooks…funny…ideal reading for their morning commute by car, bussen or sparvagnen (look it up)."— Nick Owchar The Los Angeles Times

"This hilarious little book (all 200 pages of it)…mischievously riffs off every nuance of that remarkable, if convoluted, series thriller, in much the same vein as Mel Brooks’s Springtime for Hitler played fast and loose with the Third Reich."                    — Roz Shea Bookreporter.com

"Chick lit? SO over. Police procedurals? Done to death. Sweet little cottages on Nantucket? They need renovating… It’s time to find new favorites. So English readers are being introduced to…Lars Arffssen — and that name should sound funny, since it’s attached to The Girl With the Sturgeon Tattoo, a nifty parody….Its Goth heroine, Lizzy Salamander, spends Wednesdays kickboxing, Thursdays doing Krav Maga and Fridays memorizing pi. Its muckraking journalist hero, Blomberg, has been asked to stop investigating “a vast ring of corruption, prostitution and ethnic cleansing involving the prime minister and the CEOs of Volvo, Saab and H&M” and instead write about Abba’s Christmas reunion concert."— Janet Maslin The New York Times

"…this parody of “The Girl With the Dragon Tattoo” hits its mark."— Billy Heller The New York Post Sense and Nonsensibility: Lampoons of Learning and Literature
(Simon and Schuster, August 2004, 182 pages)

"Hilarious...Most anyone who has spent any time in the worlds of literature and the academy will laugh..."

"Monty Python meets Imanuel Kant. Douglas and George have a delicious sense of the absurd." Lives in the Law

"Lives in the Law is a provocative collection of essays considering from a variety of perspectives and disciplinary backgrounds the myriad ways in which legal categories come to constitute the lives and identities of people and groups." The Place of Law

"Recent scholarship has rediscovered the spatial dimension of society. This volume brings together some of the leading lights of that revival with some of the most innovative scholars in sociolegal studies, to reconsider the place of law and law's capacity to put people in their place. At a time when power relentlessly promotes a generic version of the rule of law as a mandatory salvation for all peoples and places, The Place of Law offers a vital rejoinder."

"The Place of Law is a worthy successor to an outstanding series of edited collections on law and culture. The essays range from the Stalinist Soviet Union to the scientific laboratory, from the Internet to the nation-state and back; they explore why places and metaphors of places seem to matter so much to law, and how new structures of freedom may produce new forms of control."

"A thoroughly engaging collection of essays that plumbs the nuances of an important topic. While many have observed law's role as a bulwark against passion and chaos, the essays in Law's Madness suggest that law and madness actually constitute each other. Thus, what we think of as 'law' always emerges from the unstable effort to distinguish official legal doctrine from that which is repressed as something other than law. This book will be a 'must have' for numerous scholars interested in interdisciplinary examinations of law, from sociolegal studies to law and humanities to legal behavioralism." The Limits of Law

This collection brings together well-established scholars to examine the limits of law, a topic that has been of broad interest since the events of 9/11 and the responses of U.S. law and policy to those events. The limiting conditions explored in this volume include marking law's relationship to acts of terror, states of emergency, gestures of surrender, payments of reparations, offers of amnesty, and invocations of retroactivity. These essays explore how law is challenged, frayed, and constituted out of contact with conditions that lie at the farthest reaches of its empirical and normative force.

Law and the Sacred

"[An} interesting collection, worthy of attention by scholars in a variety of fields."—CHOICE

“Law and the Sacred brings together original and stimulating interdisciplinary work on the complex interdependence of law and religion. Indeed, the authors expand well beyond simple categories of law and religion to explore the more interesting and novel nuances of laws of the sacred and the sacrilization of law.”—David Mednicoff, University of Massachusetts

"The essays in this volume push well beyond the boundaries of more familiar research on the relationship between politics and religion. Exploring topics as diverse as Islamic legal theory, the 2000 U.S. presidential election, Kafka's The Trial, and the contemporary constitution of sovereign political power, the contributors call into question any easy opposition between the sacred and the secular, and so unsettle a central myth of Enlightenment modernism."—Timothy V. Kaufman-Osborn, Whitman College

“This work raises new questions while also reexamining standard socio-legal issues in refreshing ways. The result is a rich and innovative look at the routines of truth seeking and fact finding.”—Patricia Ewick, Clark University

“How Law Knows is a useful and interesting collection addressing law’s ways of knowing. The authors reveal that the establishment and organized use of legal facts is varied, historical, and amenable to a rich and diverse set of methods of inquiry.”—Jon Goldberg-Hiller, University of Hawaii, Manoa

"Law and Catastrophe is an edited collection that explores this inextricable and symbiotic relationship between these two concepts in the short span of five chapters. It presents to the reader a witty and often engaging group of literary essays that dissect various guises of how law and catastrophe interpenetrate."—Law and Politics Book Review

"Law and Catastrophe offers a diverse and fascinating set of essays. There has never been a more urgent need for such a work on catastrophe and law." —Anthony J. Sebok, Brooklyn Law School

"This cogent work is based on the insight that, even when it proves itself palpably unable to deal with catastrophe, law can yet reassert itself, reproducing the bases of its authority over and over again. Indeed, this very act of reassertion is revealed to be the basis of legal authority itself. This book is a must read for any scholar interested in seeing the performance of law when its veneer of total control and stability have been stripped away." —James R. Martel, San Francisco State University