Frost Library has acquired an unprecedented collection of Native American literature and history.

Two professors arrived in the basement of Frost Library early last semester to sift through boxes of old books. The boxes—32 in all—had just arrived at Amherst, and they contained what experts consider the most complete collection of Native American literature and history in existence. With nearly 1,500 volumes dating from the 18th to the 21st centuries, the books provide access to indigenous voices long ignored in history books.

“I was brought to tears,” says Assistant Professor of American Studies Kiara Vigil, who examined the books with colleague Lisa Brooks.

The volume responsible for Vigil’s tears was a 1926 handbook of the constitutional bylaws for the National Council of American Indians. The life and writings of the council’s founder, Gertrude Bonnin, are central to Vigil’s current book project. “As far as I know, no other archival collection, including those that have Bonnin’s personal papers, have a copy of this particular document,” the professor says. Gertrude Bonnin in 1926, shortly after being elected president of the National Council of American Indians. That year she authored the organization’s Constitution and By-Laws, a rare copy of which is in Amherst’s newly acquired collection. Photo © Bettman/Corbis

This volume is among the highlights of the Younghee Kim-Wait ’82 Pablo Eisenberg Collection, named to honor the financial support of the alumna whose gift made the acquisition possible, as well as the original collector. The collection features Native-authored myths and legends, tribal histories, religious tracts, biographies and memoirs, fiction, poetry, drama and historical and political writings.

College Librarian Bryn Geffert characterizes it as “the most complete collection ever compiled by a single collector.” Its volumes were published in the English colonies, the United States and Canada and within Native nations. Included are hundreds of items not held by any other major collection of Native materials in North America, says Michael Kelly, Amherst’s director of archives and special collections. The library is committed to expanding the collection.

Looking through the boxes was “like suddenly being amidst a seemingly infinite living sea,” says Brooks, an associate professor of English and American studies, who chairs the Five College Native American Indian Studies program. Brooks is building a course around the collection, and she’ll also use the books in her own studies. “The research possibilities,” she says, “are endless.” There are nearly 600 volumes of nonfiction and 900 works of fiction in the collection. Volumes range from the 1899 novel O-Gi-Maw-Kwe Mit-I-Gwa-Ki (Queen of the Woods), by Simon Pokagon; to We Talk, You Listen: New Tribes, New Turf (1970), by activist and historian Vine Deloria Jr.; to the 2013 coffee-table book I Am Alaskan, by photographer Brian Adams. 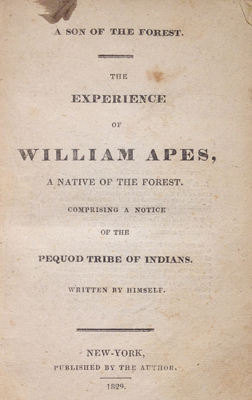 The nonfiction collection includes 87 items published in the 18th century. The oldest of these is A Sermon Preached at the Execution of Moses Paul, an Indian, by the Rev. Samson Occom, widely distributed after its publication in 1772. Occom, a Mohegan, was the first Native American to publish his writings in English. Paul was executed for killing a white man, Moses Cook. Amherst Bulletin photo Assistant Professor Kiara Vigil (far left, with Brooks) got to hold a rare document that is particularly meaningful to her: a 1926 handbook of the Constitution and By-Laws of the National Council of American Indians. Vigil is writing a book on four prominent Indian intellectuals: Gertrude Bonnin—author of the handbook—Charles Eastman, Carlos Montezuma and Luther Standing Bear.           Photo by Rob Mattson In 1952 students at a day school in Shishmaraf, Alaska, wrote and illustrated a cookbook. One recipe is for “willow meats”: “Inside of barbirch there is something that is yellowish. That is called the meat of willows. They are very good to eat. People eat it with sugar and seal oil.” In addition to books, the collection includes music, such as an 1845 Christian hymnal, Indian Melodies, by Thomas Commuck, a Narragansett. Photo by Rob Mattson Danielle Trevino ’14 (center) has taken many courses in Native American studies, and last summer she staffed an NEH institute on Native Americans of New England. She had the chance to look at several of the books in Frost. Among those she noted was Tributes to a Vanishing Race, published in 1916 in Chicago. “It’s a compilation that includes works by Native intellectuals with an introduction by two women who claim to be Native but lament the gradual disappearance of their race,” Trevino says, “which is interesting because they were living in the Osage capital, Pawhuska, around 1916, when oil money had made the Osage one of the wealthiest groups of people in the nation.” Trevino wants to know “who these women were, what their roles were in the Pawhuska community and why this book was privately published a good distance away from the astounding affluence of the Osage.” Photo by Rob Mattson

“I want students to understand that they are studying and interacting with a living intellectual and literary tradition,” says Professor Lisa Brooks. The collection includes numerous books by Charles Eastman, a physician who lived in Amherst in the early 20th century. Eastman was a prolific author of books that cover American history from the Native perspective. Eastman, who helped found the Boy Scouts of America, died in 1939. Amherst Bulletin photo Black Hawk’s best-selling 1833 autobiography is among the books that Vigil plans to teach in her 2015 seminar “History of the Native Book.” The Kim-Wait collection has several editions of the Sauk leader’s autobiography—which is still in print today. “I’m hoping to have students analyze the differences in these editions,” Vigil says, “so we can have a larger discussion about the influence and importance of print networks that Native authors used.” Elias Boudinot, a Cherokee missionary, went to the First Presbyterian Church in Philadelphia on May 26, 1826, to deliver “An Address to the Whites,” a speech aimed at raising money to establish a Cherokee Nation printing press. “I ask you, shall red men live, or shall they be swept from the earth?” asked the future newspaper editor. “With you and this public at large, the decision chiefly rests.”