There is an age-old tension between the media and academia. When the press reports something as fresh news, it’s often old news in the academy.

Such was the case last year, when The New York Times Magazine ran a harrowing, much-talked-about cover story, “Why America’s Black Mothers and Babies Are in a Life-or-Death Crisis.” It chronicled the alarming birth experiences of several black mothers—including tennis legend Serena Williams—alongside some shocking statistics: In the United States today, black infants are more than twice as likely to die as white infants, and black women are up to four times as likely to die from pregnancy-related causes as their white counterparts.

Haile Eshe Cole, visiting assistant professor of anthropology, studied this subject well before it was news that’s fit to print. “It’s become a hot topic, and when people talk about it now, it’s ‘Oh, The New York Times article’ and ‘Oh, Serena Williams.’ But people have been working on this issue for years. I mean, Arline Geronimus is the one who came up with the ‘weathering hypothesis’ in 1992!” 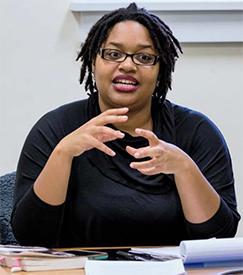 As Cole told her students, African-
American mothers with college
degrees have worse birth outcomes
than white mothers who have not
completed high school.

This weathering can harm the reproductive experience: Stress hormones limit blood flow to the placenta, for instance, and inflame the uterine lining, which can trigger early labor. On top of that, there is evidence that doctors marginalize their black female patients and don’t listen enough to their concerns. Even if they’re Serena Williams.

Cole, a mother of two, has focused her research on her native Texas, which has the highest maternal mortality rate among black women in the United States and the developed world. Last semester she taught “Culture, Race and Reproductive Health” at Amherst. If the Times story made black women’s health disparities a “hot topic,” this was a “hot course.” About 85 students from the Five Colleges tried to enroll, and Cole had to cap it at 35.

At one class session late in the semester, the students watched an episode of the TV series Unnatural Causes that chronicled the experiences of several black professional women, highly educated and financially secure. The higher a black woman climbs in the workplace, researchers found, the more she is surrounded by white co-workers and clients, and thus encounters more stereotype threat, and the more her racism-influenced stress rises.

In fact, African-American mothers with college degrees have worse birth outcomes than white mothers who have not completed high school.

After the episode ended, there was dead silence in the room. “Y’all look super shook,” said Cole quietly, then asked for reactions.

Simone Brown ’19 shared that she was born prematurely, at 4 pounds, 9 ounces. “I remember my mom telling stories about how the doctor was not interested in keeping me alive and in the NICU, because my mom couldn’t pay for it,” she said. “A couple of years ago, I introduced myself to that doctor to say, ‘I’m still small, but I’m here.’”

Olivia Gieger ’21 jumped in: “I’m shocked how, if you’re living in an integrated, wealthy neighborhood surrounded by white people, there is more added stress. Home is where you’re supposed to be thriving and comfortable.”

Cole ended by acknowledging that systemic racism is overwhelming, yes, but when black women get a high level of support around maternity, outcomes can improve. And yes, Cole told me later, with a smile, The New York Times finally caught up to that story too.